Lions can climb trees, but they don’t do it very often. 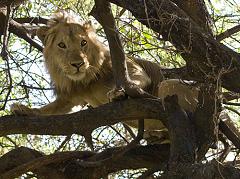 They are usually found resting under the shade of trees instead.

Unlike some other cats, lions don’t lie in trees waiting for unsuspecting prey to come waltzing along below.

Lions seem to climb trees when they want to escape from the heat of the sun or need to get out of the way of an oncoming stampede.

Occasionally, lionesses will climb trees to retrieve leopard kills that they have hidden.

Leopards keep their cubs in trees as well, which are easy prey for any predators that can make it up there.

Lake Manyara in Tanzania, East Africa is known for tree climbing lions but they are a rare sight, and many people believe the lions are just a rumor.