Why Do the Stagecoach Wheels Sometimes Turn Backwards In Western Movies?

This is the only remaining artificiality in today’s remarkable, computer-driven movie effects, which can make anything imaginable look real, no matter how bizarre, except, ironically, an old-fashioned stagecoach wheel. You can also see the effect with automobile wheels, in those television commercials that show the cars speeding along an open road.

A movie camera takes a series of still pictures at the rate of 24 per second, or 24 “frames per second.” Fortunately for Hollywood, our slow human brains can’t assimilate so many separate pictures and we perceive them as all run together, as if the objects in them were progressing smoothly from one position to the next. (Actually, it’s our eyes that can’t separate the images if they come too close together: Our brains are fast enough. But it still takes my brain more than an hour, if then, to understand what’s going on in some movies.) 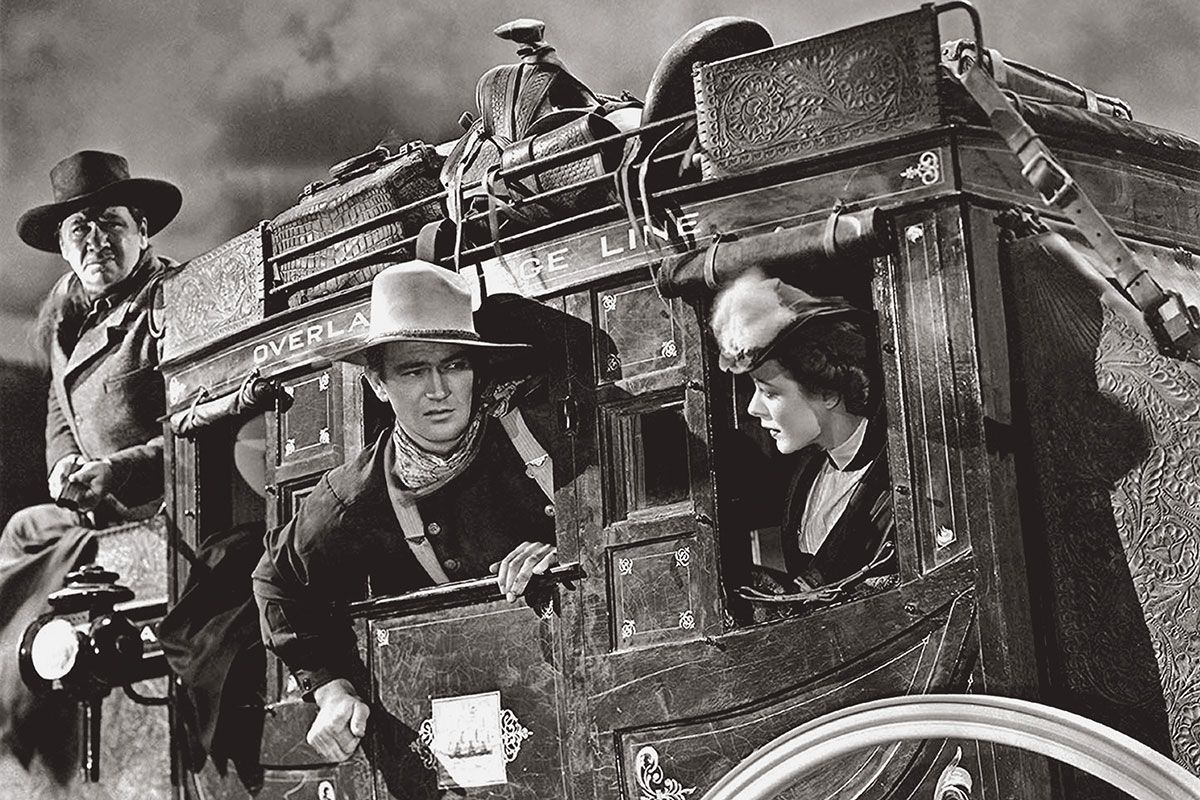 Let’s say that one of the wagon wheel’s spokes is painted red. And let’s say that when the camera snaps picture number one, the red spoke is pointing straight up, at the twelve o’clock position.

For extra credit, as we professors like to say, can you figure out how fast the wheel appears to be rotating in this example? (The answer can be found at the end of this section.)

So depending on the number of spokes in the wheel and the actual rotational speed of the wheel compared with the 24 frames per second at which the film was shot, the wheel can appear to be moving forward or backward or, when the spoke speed just happens to be synchronized with the camera’s shooting speed, not moving at all. This last is a highly specific coincidence, so it doesn’t happen often. But if you look closely, you can see the wheel “stop” briefly as it passes from “forward” motion, when the spoke is slightly ahead of the camera clicks, to “backward” motion, when it is slightly behind.

In reality, of course, the wheels don’t have one red spoke; they all look alike. Any spoke is a double for any other. Therefore, any spoke at all might be in the one o’clock or eleven o’clock position when the camera’s shutter clicks, and it will still look as if the wheel is turning right or left.

When the wheel is going fast enough, the spokes are moving too fast for the camera’s shutter speed to stop their motion. They therefore degenerate into a blur, and the whole effect of backward or forward motion disappears.

You can see exactly the same effects in movies that depict a later mode of transportation: propeller-driven airplanes. When the plane’s engine is started, the propeller looks as if it is alternating between the clockwise and counterclockwise directions. As its speed increases, the blades pass through successive “slightly ahead” and “slightly behind” positions with respect to when the camera clicks. As their speed becomes fast enough, the blades become a blur.

Want to see the same effects at home, but you don’t have a stagecoach or airplane handy? Try this.

If you have a portable electric fan, take it into a room that is illuminated with fluorescent light. When you turn the fan on and it speeds up, the blades will appear to be rotating first in one direction and then the other. That’s because fluorescent lights flicker on and off 120 times a second (yes, 120; visit the Nitpicker’s Corner), and that’s five times faster than a projected movie, so we are unaware of the flickering. The “on” flickers are what you see by, so it’s just the same as if you were being presented with a series of rapid frames in a movie theater.

Fluorescent lights run on alternating current (AC). That means that the electricity flows in one direction for half the time and in the opposite direction the rest of the time. In the U.S., the AC frequency is sixty cycles per second, meaning that one full cycle takes a sixtieth of a second.

A fluorescent light is “on” only during the current surges, so you might say that it behaves like a movie camera that is snapping 120 pictures per second.