Animals of all kinds were respected and revered in ancient Egypt, as they were in close contact with deities and gods. 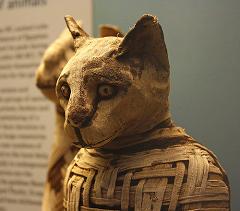 Egyptians discovered very early that cats, though not particularly loyal, at least had the virtue of being useful.

Egyptians also used cats as retrievers in bird hunting, their owners would stun birds with boomerangs and unleash the cats to finish them off and bring them back.

Egyptians thought that a cat in the house ensured that the household would have many children because the cat-headed Bastet was the goddess of love and fertility.

Cats were respected enough to be mummified with their owners or buried in special cat-god fields, and it was against the law to take them out of Egypt, not that the law did much good.

Phoenician sailors smuggled them out of the country and traded them around the Mediterranean.

The Truth about Cats and Gods.