How did Robert E. Peary reach the North Pole and When?

Admiral Robert E. Peary’s ship, the Roosevelt, steamed north through the ice-packed waters of Smith Sound in 1908, her wooden hull specially fortified to meet the harsh barriers of ice, her primary means of propulsion a 1,000-horsepower engine rather than the sails of previous arctic exploration ships.

Peary’s methods differed in another fundamental way: years of experience in the north sledging across the great central plateau of Greenland had taught him the necessity of living like the Eskimos, sleeping in igloos on musk ox skins, keeping to a monotonous diet of dried meat and fat.

Over and above these practical tactics integral to his success was Peary’s obsession with a dream, his concept of himself solely as an instrument to attain it, and his unfaltering will, for “the grim guardians of earth’s remotest spot,” he wrote, “will accept no man as guest until he has been tried and tested by the severest ordeal.” 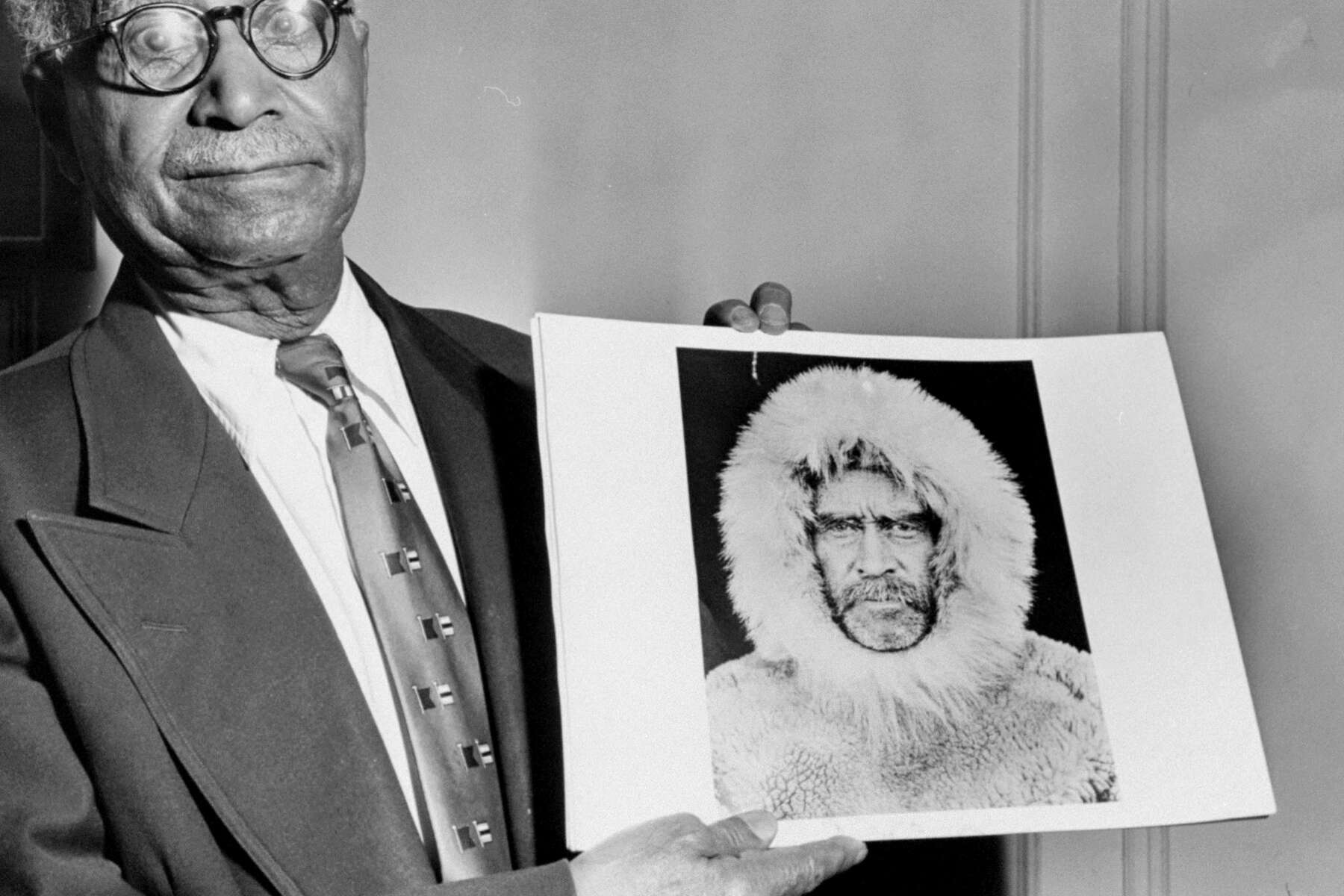 As the impracticality of northern trading routes to the Far East became apparent in the 19th century, explorers nonetheless persisted in venturing north, stirred by the new goal of reaching the top of the world. Sir Edward Parry was one such adventurer who in 1827 confronted the northern regions with small iron-bottomed boats, which were sailed in open water, then dragged over the solid ice. Southern currents overwhelmed his boats, however, preventing him from getting farther north than 82°45′ N, 435 miles from the Pole.

Fridtjof Nansen concocted the novel scheme of sailing a boat across the top of Siberia, freezing her into the ice pack, and simply drifting on toward the Pole. Thus the hardy Fram, constructed to withstand pressure from the ice, drifted from 1893 to 1895. At 83° N, Nansen and a companion left the ship to race the remaining distance in dog sleds. They got within 224 miles of their goal before drifting ice forced their return. While Nansen fortuitously hooked up with a British expedition, the Fram remained locked in ice for 35 grueling months, only returning to Norway in 1896. Still strong, she would sail again in 1911 under the command of Roald Amundsen, the first to reach the South Pole.

Peary himself made several attempts to attain the North Pole. In 1898, before the days of the Roosevelt, Peary’s ship was blocked from entering the Arctic Ocean by solid ice packs. Forced to set up base camp 700 miles from the Pole, he managed to sledge half that distance before turning back. On another expedition, in 1905, violent storms and food shortages put an end to his progress at the position of 87°06′ N.

At 50, Robert Peary was scarcely ready for the comforts of home. Too much civilization made him restless. Hard as it is to fathom, he opted for the desolation of the arctic, the haze of wind-driven snow, gleaming black channels of water, and the uncanny sight of sun and moon circling the sky together.

Wiser and yet more determined after his first two expeditions, Peary sailed up Smith Sound from the northwest coast of Greenland in 1908 with 49 Eskimos and 246 dogs. The Roosevelt steamed 350 miles north to Cape Sheridan on Ellesmere Island, crashing through “ice of all shapes and sizes,” wrote Peary, “mountainous ice, flat ice, ragged and tortured ice, ice that, for every foot of height revealed above the surface of the water, hides seven feet below, a theatre of action which for diabolic and Titanic struggle makes Dante’s frozen circle of the Inferno seem like a skating pond.”

Throughout the winter months Peary and his men transported supplies in 13-foot oak sleds equipped with ash runners 90 miles overland to Cape Columbia. Rations were calculated to the finest detail, allowing each man daily one pound of pemmican (dried meat with fat), one pound of ship’s biscuits, four ounces of condensed milk, and one-half ounce of tea, and for the dogs, one pound of pemmican each daily.

On February 28, 1909, an advance party led by Captain Robert Bartlett set out from Cape Columbia on the northern shores of Ellesmere Island, 413 miles from the Pole. Peary’s scheme was that advance parties would open the track and supply provisions part of the way, the final stretch to be tackled by his assault team in a strenuous dash. By March 1, 24 men, 19 sleds, and 133 dogs were on their way north. Leads, or channels of water, presented the greatest trial, sometimes delaying them for days, while the ice cracked, shifted, and ground together. Ice floes served as precarious stepping-stones. Once the ice shifted as they slept and Peary awoke to find a widening lead a mere foot from a team of dogs. Sleeping under skins, the men were able to get out more quickly than from sleeping bags.

The last supporting team turned back on March 30, leaving Peary with his longtime assistant Matthew Henson, 4 Eskimos, 5 sleds, 40 dogs, and 133 miles to go. With the best dogs and a lightened load, they sped over the ice, covering 25 miles in a ten-hour day for five consecutive days. Harsh winds and frigid temperatures of -35° to -40° F cracked and burned their faces. Even the Eskimos complained about their noses.

In places the hazardous ice was so thin they had to crawl. On the second day a runner of one sled cut clear through the ice and was nearly lost. At about noon (of the Columbia meridian) on April 6, Peary stood at 89°57′ N, a mere three miles from his dream, and too tired to take another step. When after a few hours of sleep they resumed the journey, a peculiar phenomenon occurred.

They traveled due north, then found themselves heading due south, without having changed their course. Turning back on their path, they came to that point where north, east, and west cease to exist. “Where we were,” recorded Peary, “one day and one night constituted a year, a hundred such days constituted a century. Had we stood in that spot during the six months of the Arctic winter night, we should have seen every star of the Northern Hemisphere circling the sky at the same distance from the horizon, with Polaris (the North Star) practically in the zenith.”

Here on this illustrious spot Peary not only planted a silk American flag, made by Mrs. Peary 15 years before, but felt compelled to leave the colors of the Delta Kappa Epsilon fraternity (with fond memories of Bowdoin College), as well as the “World’s Ensign of Liberty and Peace,” and flags of the Navy League and the Red Cross. One can only wonder what passed through Marie Peary’s mind when she received this from her incorrigible husband:

I have won out at last. Have been here a day. I start for home and you in an hour. Love to the “kidsies.”

Thus 20 years of planning culminated in 30 hours at the Pole, whereupon Peary, with one backward glance, headed south.