The hippopotamus, or hippo for short, got its name from the ancient Greek words ἵππος (hippos), which means “horse”, and ποταμός, (potamos), for “river”, and put together meaning “horse of the river”. 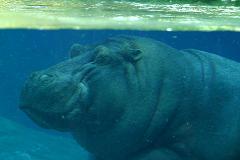 A male hippopotamus is known as a bull, a female as a cow and a baby as a calf.

Hippopotamuses are gregarious, living in groups of about 30 animals, and these groups are called pods, herds, dale or bloats.

Hippopotamuses are the third largest mammals in the world after whales and elephants.

The most recent theory suggests that the hippopotamus evolved from whales, and the group likely split into two separate branches around 54 million years ago.