How do animal trainers teach guide dogs to cross at the green light if they are color blind?

Since dogs are believed to be color blind, teaching a canine to cross at a green light sounds like a very difficult task. In fact, guide dogs don’t look at the traffic light at all. They learn to stop at curbs so that their master may listen carefully for traffic before crossing.

Training a guide dog is a lengthy and serious process, one that can be undertaken only by professionals. It is done at any one of ten private, nonprofit schools, such as the Guide Dog Foundation in Smithtown, New York, that teach blind people and dogs to work together as teams. This type of dog is sometimes called a Seeing Eye dog. The term comes from another private school, Seeing Eye, Inc., in Morristown, New Jersey, which holds a trademark on the name.

Before the schooling starts, the dog is meant to enjoy a happy, well-rounded puppyhood. The Guide Dog Foundation breeds its own stock of Labradors and golden retrievers, which are farmed out to foster families, known as “puppy walkers.” 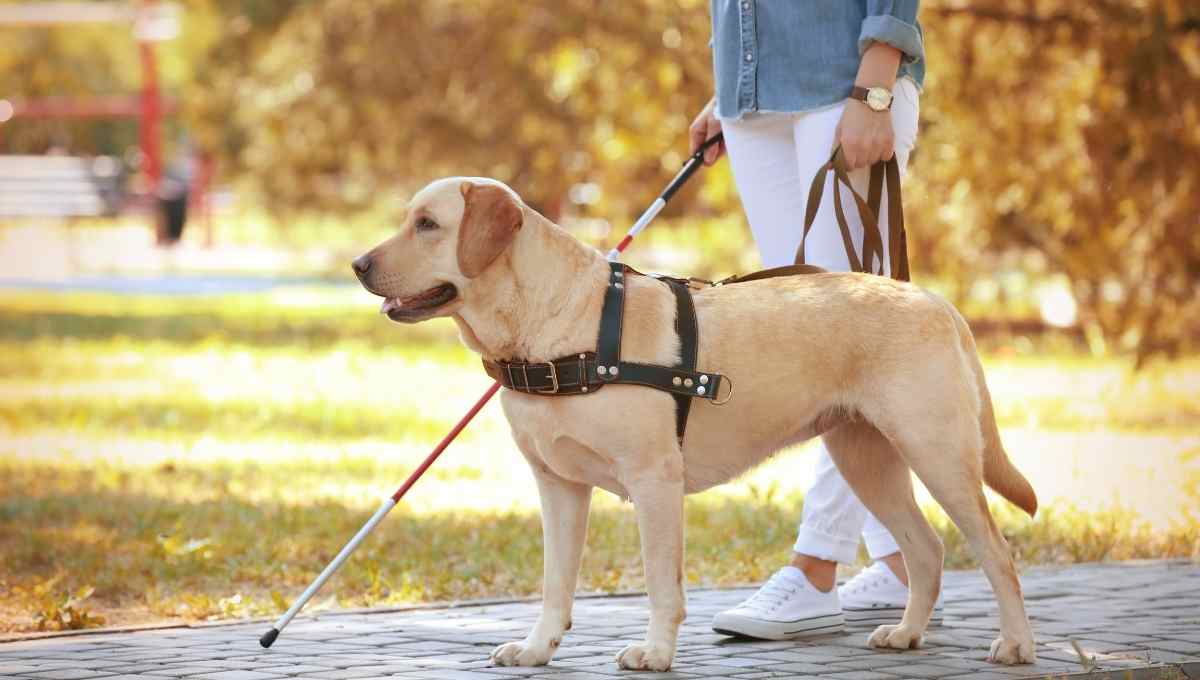 The family’s primary responsibility is to care for the dog and expose it to as many different situations as possible. It is expected that the dog will be taught to walk nicely on a leash, sit, stay, lie down and come when called, but nothing more. When the puppy reaches a year old, it returns to the Foundation and begins its training, which will last from three to six months.

One of the first things the dogs learn is to walk straight down the center of the sidewalk without sniffing or being distracted by people or other dogs.

Elane Siddall, an instructor at the Guide Dog Foundation, explains that this is done with positive and negative reinforcement: “You’re constantly telling the dog, ‘Straight, come on now, straight,’ and when the dog’s doing well you praise it, ‘Good dog.’ When the dog does something inappropriate, you give a snap on the leash, ‘No, now straight,’ and give it something immediately to counterbalance its correction, something you can praise it for.”

Once the dog has learned to walk straight down the center of the sidewalk, deviating only for obstacles, it is taught to stop at curbs. Siddall does this by approaching the curb while repeating to the dog, “Straight to the curb.” When she is about six feet from the curb, she says, “Steady to the curb,” slowing down the dog as she gives the command.

If all goes well, the dog realizes that something is changing. About two steps from the curb, Siddall says, “Halt,” and gives a slight jerk on the leash and a release. When she has stopped the dog, she pats the curb with her foot and says, “Good curb, stay at the curb, good curb.” After many repetitions, the dog eventually begins to stop at the curb on its own.

Then it will be up to the owner to listen and determine when to cross. When he hears traffic start up at his side, he knows he can safely cross the street. If the traffic in front of him is moving, he knows he must wait.

If a blind person makes a mistake and winds up in an intersection with a car coming, the dog will either halt until the car passes, pull its master to the side and out of the way, or put itself between its master and the obstacle. When the car has passed, the dog will lead the blind person forward to the opposite curb.