How do salmon return to rivers where they spawned after years of migration over vast distances?

The extraordinary process of salmon migration begins when an adult female salmon lays her eggs on a gravelly riverbed, forming a nest by swishing her tail from side to side.

The best location is in shallow water at the head of a riffle, where fast water spills over the gravel and brings nourishing oxygen to the eggs.

Only about 5 out of 5,000 of these small pink eggs (each about the size of a buckshot) actually hatch, and these are then threatened by hazards such as predators and polluted water. Since the female dies soon after laying her eggs, the young alevins are equipped with a large yellow sac attached to their bellies which nourishes them for several months. 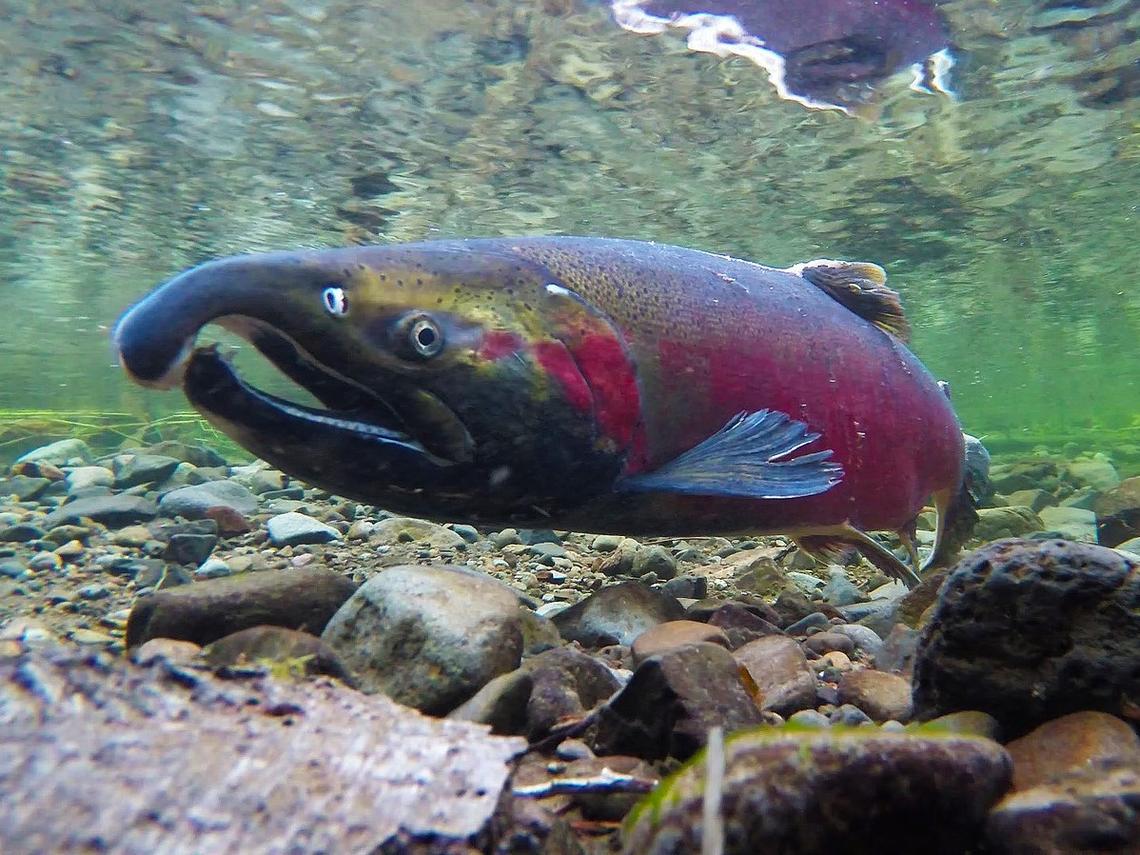 At an age of one to three years the smolts, still quite small, go downstream to the sea, sometimes traveling as much as thousands of miles to do so. In the oceans they feed voraciously on plankton and small fish for at least a year, generally three or four.

Pink salmon from the rivers of British Columbia travel northward, paralleling the North American coast, sweeping along the southern coast of Alaska, then turning south, making a huge 2,000 mile elliptical path back to the mouth of the spawning river. While the pink salmon make one circuit, chum and sockeye may complete two or three, traveling 10,000 miles before seeking their natal streams. Although various species of salmon may mix while swimming and feeding far out at sea, they consistently separate when their sex cells ripen, triggering the response to go home to spawn.

How do the salmon know where to go? Some biologists suggest that the fish are guided by celestial cues, in particular by the position of the sun; but since cloudy days are hardly the exception, in the Pacific Northwest and Gulf of Alaska at least this theory seems unlikely.

Each body of water has its own inherent chemical composition and thus a particular smell, and many biologists believe that salmon, on arriving near the mouth of their natal river, proceed to smell their way home. But this idea fails to explain the ability of salmon to return over vast distances, especially when in experiments they have been taken out and dumped into totally unfamiliar waters. Dr. William F. Royce at the University of Washington feels that the migratory cues are inherited rather than memorized, that the salmon discern tiny electrical charges generated by ocean currents and orient themselves according to the earth’s magnetic field. The path is in some way imprinted on the chromosomes and passed on through the generations.

However the salmon rediscover their natal rivers, the journey upstream is another awesome feat. They travel night and day, swimming in a series of spurts, with intermittent rests in quiet pools. They flap their strong tails in wide strokes to propel them upstream, up swift currents and waterfalls that may be 10 or more feet high.

No matter how long the arduous swim takes, the salmon eat nothing the entire way, surviving only on the oxygen in the water. One of the longest runs is in the Yukon River, where chinook travel nearly the river’s entire length of 2,000 miles to spawn in Nesutlin Lake. Beginning at speeds of 10 or 20 miles a day, they later accelerate to 50 or 60 miles a day. After a month of travel the battered, emaciated fish arrive home and prepare to spawn, but within days after the female deposits her eggs and the male, hovering nearby, releases his sperm, both will die.

Salmon populations have been dangerously reduced not only by fishing industries and river pollution, but by construction of dams that have prevented their inland journeys. In the eighteenth century salmon were so abundant in the Connecticut River that they were considered common, even lower class, fare. In 1798 the Upper Locks and Canal Company built a 16 foot dam across the river at Hadley Falls, Massachusetts, and by 1810 the occasional salmon caught was so rare that the lucky fisherman had little idea what sort of fish he’d hooked.

Similarly, the Grand Coulee Dam built on the Columbia River in the 1930’s had harmful effects on chinooks and bluebacks from that area. Laws today frequently require that fish ladders, or steps, be built on any dam in a river containing salmon.