How does the Army teach dogs to sniff out drugs at borders and bombs at airports?

Hiding drugs in a secret spot or wrapping it in clothes doused with perfume won’t fool a dog properly trained in narcotics detection.

Although training begins as a simple exercise in retrieving, an intelligent, hardworking dog can learn to uncover up to three different kinds of drugs, even when the scent it smells is 90 percent detractor and only 10 percent narcotics.

The Army and the Air Force actually maintain schools for training dogs to sniff out drugs or bombs. More than olfactory acuity is required in a dog trained for such purposes, it must be willing to retrieve repeatedly without losing interest. 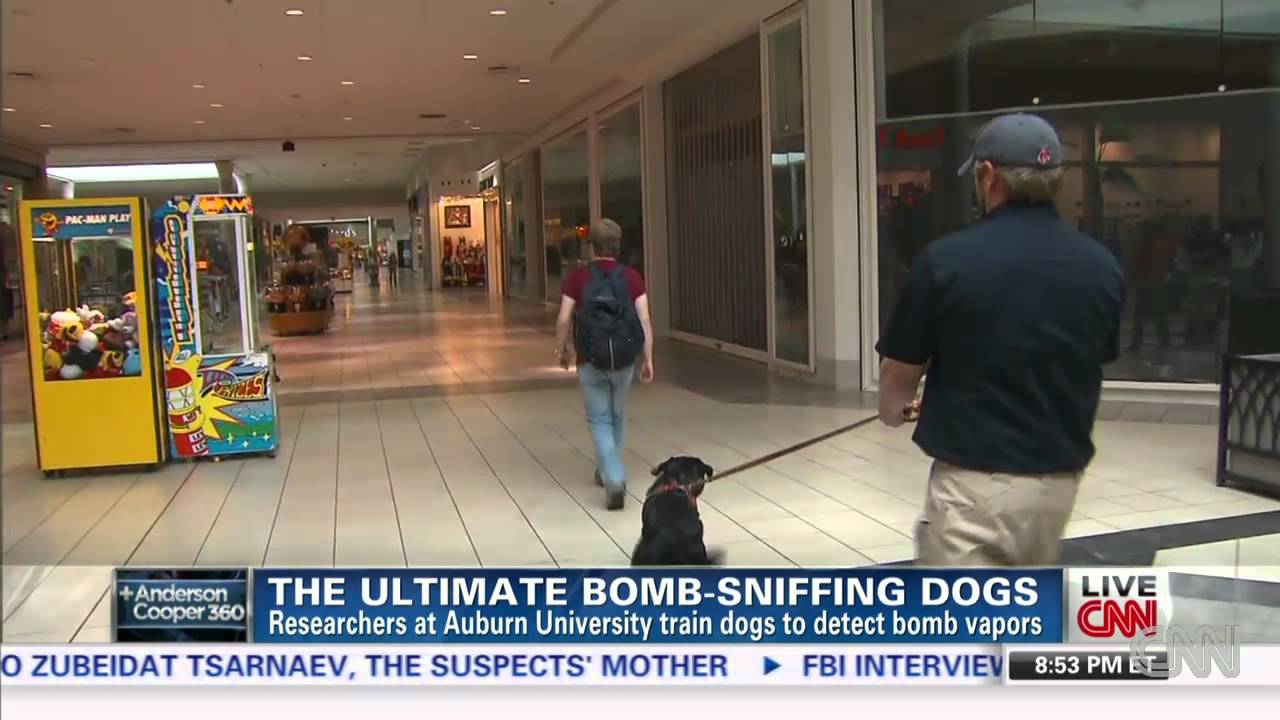 German shepherds and, occasionally, Labrador retrievers are used. The dog must be taught to discern a particular scent and to alter its behavior when it does so. In the presence of bombs, for example, the dog may be instructed to sit or lie down upon discovering the scent; it could of course be disastrous if the dog tried to ferret out explosives.

If all runs smoothly, initial training in cannabis detection takes approximately ten weeks. Necessary equipment includes about a half kilo of cannabis, a harness, and a 25 foot line.

Early attempts at teaching dogs to find heroin failed utterly, for during the training process the dogs became addicted by sniffing the stuff and eventually died. More recently laboratories have been able to divide heroin into individual components and manufacture a material bearing the scent of heroin whose formula is highly classified.

The first step is to get the dog interested in an ounce of cannabis, placed in a small plastic bag and wrapped sufficiently to protect it from the dog’s teeth.

At one point the Army used gauze around the cannabis to soak up saliva, but suddenly discovered that the dogs were being trained to sniff out bandages rather than dope. If the dog naturally likes to retrieve, the training process is easier. Much as in training a dog to retrieve, say, a stick, the handler tosses the bag about 10 feet and encourages the dog to bring it back, with praise and rewards for successful completion of the retrieve.

Later, the handler asks the dog to stay while he hides the bag at a particular distance, so that the dog must depend on its nose, not its eyes, to find the bag. After about a month of such work, the dog may be ready to find the bag in luggage and packages.

At first there may be only two from which to choose; later, more may be added. Then the handler hides the bag in a car or a building, the complexity of places increasing only as long as the dog succeeds. After two months the handler begins to disguise the cannabis with nearby articles smelling of perfume, formaldehyde, or some other scent frequently used by dope smugglers. The percentage of scent of the detractor in relation to that of the marijuana may be increased gradually.

The handler can then cross train the dog to find other types of narcotics or to discern black powder, sulfur, and other materials used in making bombs.