Many weird religions would say the chicken came first without hesitation, claiming that their god created the animals and birds complete and without evolution or change. 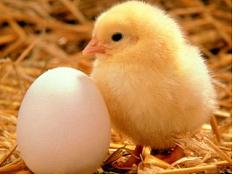 Genetically, chickens can be traced back to an earlier bird found in Indochina called the red jungle fowl.

Over time, with enough tawdry little love affairs and subsequent genetic mutations, one of these red jungle fowl mothers laid an egg about 8,000 years ago, the egg that “came first.”

It produced a bird much more closely resembling a chicken than a red jungle fowl.

So the egg came first, and shortly afterward the chicken was born, becoming a fixture on farms everywhere.