Although modern suspension bridges dazzle the eye as awesome feats of technology, the engineering form is nearly as old as man himself. Vines were the source of cables on the earliest suspension bridges. In the fourth century A.D. plaited bamboo and iron cables were used on bridges in India.

The first truly modern suspension bridge was constructed in the mid-nineteenth century by John Augustus Roebling, a German born American engineer. His bridges, which still stand, have towers supporting massive cables, tension anchorage for the stays, a roadway suspended from main cables, and, a vitally important innovation, a stiffening deck below or beside the road deck to prevent oscillation. 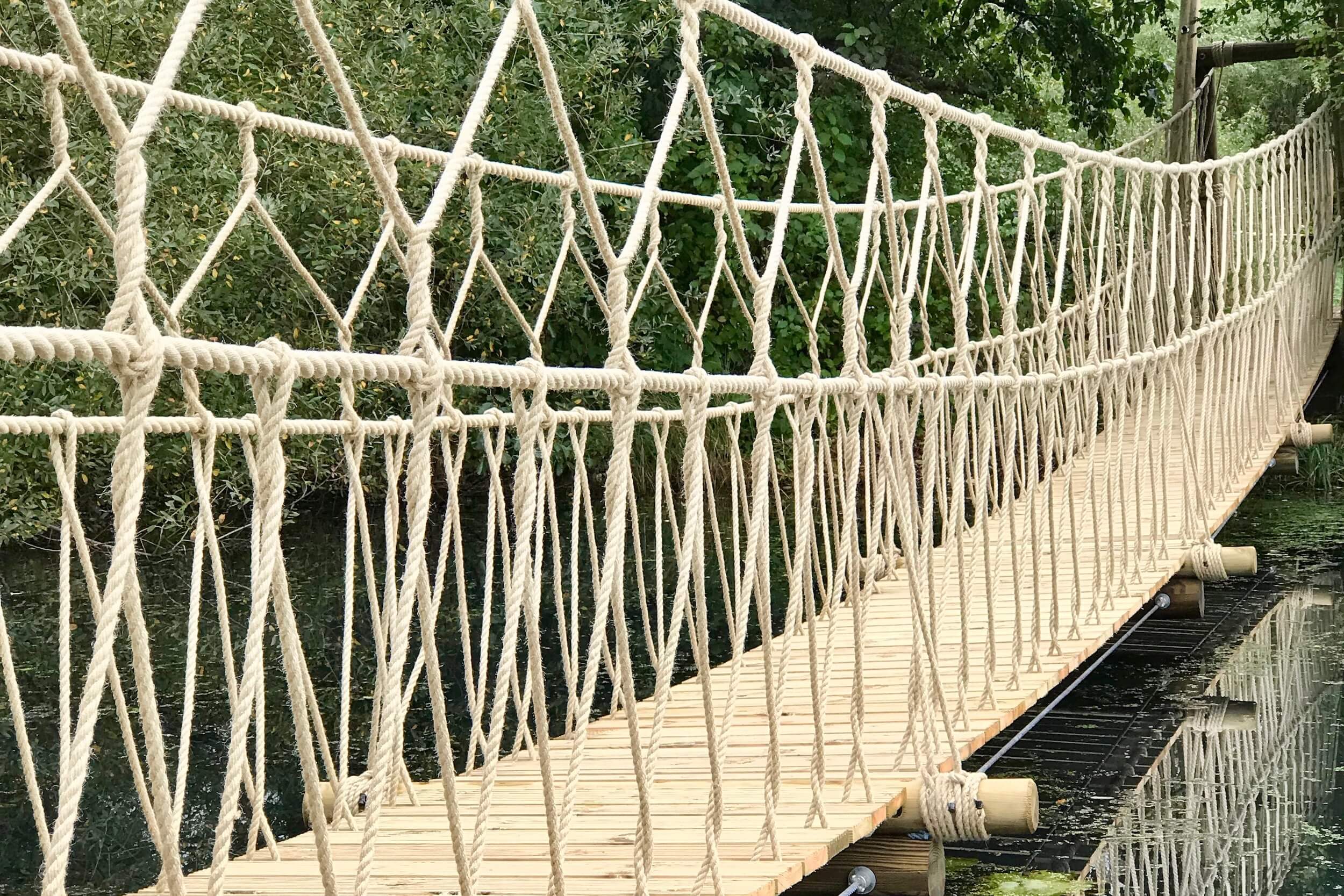 In 1867 Roebling had the revolutionary idea of using steel wire, more resilient than iron, for the cables. Six iron trusses would run the length of the bridge’s floor for stability. Aesthetics, too, were a consideration, as evidenced by the beautiful stays and broad walkway. Roebling had a tragic accident and died in 1869, but his son Washington Augustus Roebling assumed responsibility for construction, which was not completed until 1883.

In order to dig the foundations and sink the towers of the Brooklyn Bridge, Roebling used pneumatic caissons, a method still very much in the experimental stage in his day. A pneumatic caisson is a huge box or cylinder with a lower cutting edge, closed at the top and filled with compressed air to prevent soil and water from pouring in.

The vessel contains an internal, airtight deck, with pressurized chambers below, where workers excavate the water bed. Mud and rubble are hauled out through another air lock, and concrete is lowered in. Pneumatic caissons today are constructed of reinforced concrete; Roebling’s caissons (which measured approximately 100 by 160 feet) were made of yellow pine, coated with pitch on the inside, with tin on the outside.

Furthermore, no one in the mid nineteenth century understood the necessity of decompressing slowly after working in the chambers of the caisson; more than 100 workers, and Roebling himself, suffered severe cases of “the bends.” Today, the length of time one can spend underwater and the rate of decompression are regulated by law.

Roebling’s two pneumatic caissons suffered a series of disasters, floods, fires, and blowouts, as the cutting edges gradually sank into the riverbed. Working three shifts of eight hours each for more than two years, 360 men removed mud and gravel, exploded the hard clay bottom, and removed traprock and gneiss, all by the light of gas burners and calcium lights.

Erecting the cables occupied another twenty six months. After the 271.5 foot towers were constructed, the first wire connecting the banks was towed across by scow and hoisted into position between the towers. A second rope was dragged back and the two ends spliced together, forming a continuous rope, or “traveler rope. On each bank the rope was looped around driving and guiding wheels attached to the anchorages. In all suspension bridges, anchorages secure the ends of the cables and may be made of masonry, concrete, or natural rock.

Next, other ropes were drawn across and a planked footbridge built from which to regulate the placement of cables. Large wheels of wire were positioned near the anchorages on the Brooklyn side. A loop of two wires was hung around the light wheels of a “traveling sheave,” which in turn was fastened to the traveler rope. Thus one trip of the sheave carried two wires from the Brooklyn to the New York bank, where they were fastened to a horseshoe shaped structure called a shoe. The sheave was returned empty to the Brooklyn side, and a second sheave brought two more wires across. A total of 286 wires, bound parallel, went into each strand, and nineteen strands, in turn, made up each of the four massive cables.

The modern method of suspending a suspension bridge, although faster and more efficient, is not very different from that instigated by the Roeblings. Tower and anchorage foundations are laid first by underwater excavating, driving piles, use of pneumatic caissons, or cofferdam (a wall that isolates the area of work), depending upon the condition of the water bed.

Next, the concrete pier tops are leveled. Steel slabs nearly 5 inches thick are attached to the piers with steel dowels, and bottom sections of the towers are welded to the slabs. Steel platforms, equipped with cranes and other hoisting gear, are slung between the low towers, which are gradually built up.

Cables of high tensile steel, with individual parallel wires or twisted wires, may be as massive as 1 yard or more in diameter. Lengths of cables are put onto huge reels bearing nearly 30 miles apiece, the ends of the cables being carefully spliced together. A carriage motivated by a pulley system bears the reel over a fixed cable, from one anchorage up over the towers to the opposite shore. There the loop is anchored and a new one placed on the wheel. In order for the construction crew to have access to the cables, a temporary catwalk of cross timbers is erected. Another machine binds the cables together with wire. Finally, a coat of corrosion resistant paint is added.

The road deck is built out gradually from both sides of the river. Or sections of it may be floated out and raised into place. There is always a certain degree of distortion, so chords of the stiffening truss are added only when the bridge is nearly complete. Until that time it remains vulnerable to strong winds.

The main span (the length between the two towers) of the Verrazano Narrows Bridge, connecting Staten Island and Brooklyn, New York, reaches 4,260 feet, the longest in the world, and the spectacular Golden Gate Bridge in San Francisco stretches a total of 8,981 feet, with a main span of 4,200 feet. The strongest suspension bridge is New York’s George Washington Bridge, designed by P. H. Ammann and constructed in 1931. Each of the four original cables, almost 1 yard in diameter, contains 26,474 galvanized steel wires, giving the bridge a live load strength of 5,080 pounds per foot.

A second road deck was added in 1962, and the bridge now accommodates fourteen lanes of traffic.