In the play Rhinoceros by Eugène Ionesco, Berenger watches as the people in his life turn into rhinoceroses, including his coworkers, his best friend, Jean, and his secretary, Daisy. 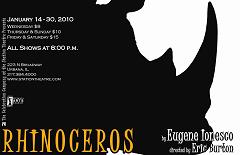 Berenger is left alone to fight all of the rhinoceroses.

In the classic play that bolstered the playwright’s career in America, Engene Ionesco was illustrating his thoughts on the end result of totalitarianism.

He was trying to make the point that a government-dominated society turns humans into rampaging beasts, and once it has started, there’s no stopping it.

The play Rhinoceros, also known as its original French title Rhinocéros, was written in 1959, and belongs to the school of drama known as the Theatre of the Absurd.

Ionesco expresses his horror of ideological conformism in the play, which was inspired by the rise of the fascist Iron Guard in Romania in the 1930s.

He probably had a bad day at the office.