How did Marie Curie discover radium and Where did radium come from?

The story of the search for radium is a romantic and stirring one.

Behind it is a woman who was passionately curious, daring in her convictions, and determined to work in an age hardly encouraging to professional aspirations among those of her sex.

From a dilapidated shed, described by one German chemist at the time as a “cross between a stable and a potato-cellar,” came a discovery that would throw light on the structure of the atom, open new doors in medicine, and save lives in future generations. 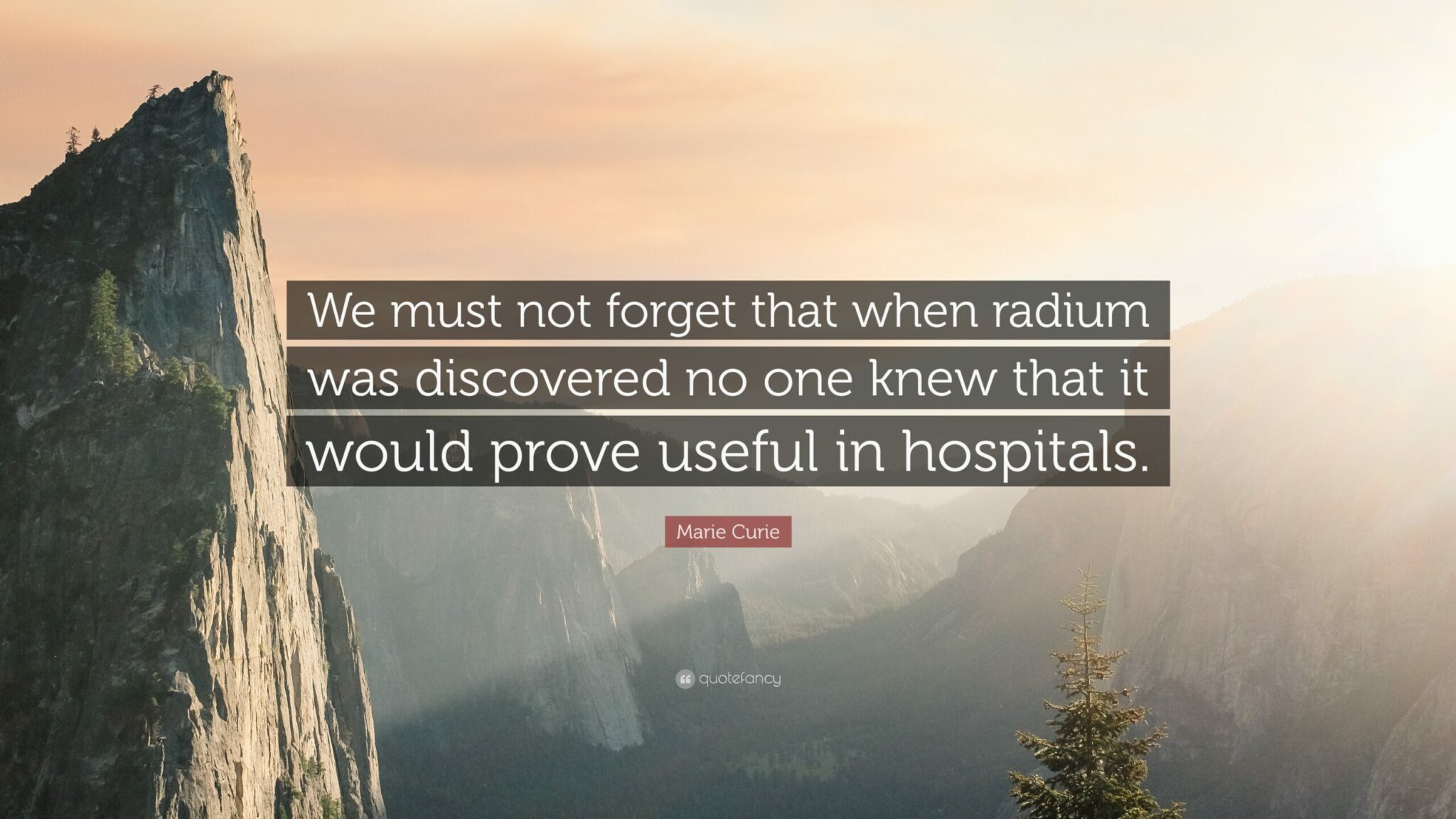 Marie Sklodowska came to Paris and the Sorbonne in 1891 as a reticent Polish woman of 24. Taking a solitary room in the Latin Quarter, she began her studies in mathematics and physics. By 1897 she had two university degrees and a fellowship, as well as a husband and a newborn daughter. In the physicist Pierre Curie, Marie had found both an adviser and a lover, someone as serious as she, who shared her interests and became drawn into her quest.

In that year Marie was casting about for an appropriate subject of study for her doctorate. The scientific world was in an uproar over Wilhelm Rontgen’s discovery of X rays in 1895, and this was an obvious field. But Marie looked further, and an accidental discovery by Henri Becquerel sparked her interest.

In 1896 Becquerel was studying uranium salts. He had wrapped some photographic plates in a black cloth and covered them with a sheet of aluminum, followed by crystals of a uranium compound. He planned to study the effects of the sun on the crystals, but since it was cloudy that day and on the two succeeding days he left the plates in a drawer.

On removing them he was stunned to see that the plates were fogged where the crystals had covered them, that is, the uranium had produced an impression on the plate similar to that which light would make. Becquerel was the first to see evidence of the spontaneous emission of rays, what Marie Curie would later name radioactivity.

The intriguing question, of course, was where did this energy come from? What was the source of energy that allowed the rays to penetrate not only paper, but metal? An ambitious Marie Curie undertook to find out. Through her husband and the School of Physics and Chemistry, Marie obtained a small room in which to work, a glassed-in storeroom housing lumber and machines, on the ground floor of the school.

It was damp, ill equipped, even lacking adequate electricity. But Marie set to work, first to determine the power of ionization of uranium—that is, its capacity to make the air conduct electricity. She used an electrometer called a piezoelectric quartz, which Pierre and Jacques Curie had devised some years before. Realizing that a crystal will be slightly deformed by an electric charge applied to it, the brothers developed an instrument that amplified this deformation; thus they could measure small electric currents.

Marie’s experiment using the piezoelectric quartz was quite simple. She placed the substance to be tested in a chamber of ionization consisting of a lower plate, which was charged, and another plate opposite to it, which was attached to the electrometer. She tried to make an electric current pass through the air between the plates, and if this occurred, the electrometer would detect it.

Within several weeks she found that uranium’s ionizing capacity was an innate characteristic, which neither resulted from a chemical reaction nor depended on external circumstances such as light, moisture, or temperature. She had shown, in fact, that the activity of uranium was an atomic property of that element, a ground-breaking find for 20th-century physics. Mme. Curie also found that the intensity of the rays was proportional to the quantity of uranium present in the compounds she examined.

If uranium had such power, why not other materials? Was it purely chance that uranium’s unusual characteristic had been revealed? Marie energetically gathered materials from the School of Physics with the intent to study all known elements, whether in a pure or compound state. Before long she discovered that thorium, too, emitted rays, of an intensity comparable to those of uranium.

Fortunately, Mme. Curie did not stop with these discoveries. She wanted to test still other materials and obtained various mineral samples from the School of Physics. As might be expected, those containing thorium or uranium were radioactive; the others were not. But what came as a bewildering surprise was that the intensity of emissions by the active minerals, specifically pitchblende, was four times that of a pure oxide of uranium. Marie was sure her experiment was erroneous and repeated it scores of times. Something was far more radioactive than uranium or thorium, yet Marie had already tested all known elements.

On April 12, 1898, Mme. Curie’s former professor, Gabriel Lippmann, made a presentation to the Academie des Sciences on her behalf. In it was expressed a -belief that these minerals may contain an element which is much more active than uranium.” Curie’s hypothesis, then, was the existence of a new element.

At this point the young scientist was overwhelmed by excitement and passion to prove her theory. Pierre, too, was intrigued enough to abandon his study of crystals to join her. Initial experiments with small amounts of pitchblende were begun. Marie and Pierre used a new method of chemical research based on radioactivity; they separated the substance into various products by traditional means of chemical analysis and then measured the radioactivity in each.

As the breakdown continued, the radioactive element became increasingly concentrated. It was possible to separate it from all except one element: bismuth. By June 1898 Marie had a sample of impure bismuth sulphide that was 150 times more radioactive than uranium. Pierre placed this substance in a tube and heated it. The substance itself remained in the hotter part of the tube while a thin black powder collected apart from it. This potent powder showed an activity 330 times greater than uranium.

In the Proceedings of the Academy of July 1898, the Curies wrote, “If the existence of this new metal is confirmed we propose to call it polonium, from the name of the original country of one of us.”

November brought a startling development. Upon removing bismuth and polonium from the radioactive material in pitchblende, they obtained a liquid containing barium, which was still highly radioactive. After dissolving and reprecipitating it numerous times, they had a residual substance 900 times as radioactive as uranium, yet barium itself was known not to be radioactive.

The scientists strongly suspected the presence of a new element. They now turned to Eugene Demargay, who operated a spectroscope, which was the means to confirm their suspicions. Demargay dissolved a tiny sample of the Curies’ barium compound in acidified water and painted it onto electrodes. He passed a spark along the electrodes and was able to photograph the spark spectrum of the substance. He found a spectral line (or linear image corresponding to a component of the radiation emitted by the substance) that did not result from any known element. As the solid was purified, furthermore, the spectral line grew more intense. On December 26, 1898, the Curies announced a new chemical element in pitchblende: radium, whose radioactivity was thought to be “enormous.”

This announcement did not mark the end of Marie Curie’s work. Rather, she now set herself the Herculean task of isolating the element so that chemists might see once and for all proof of her beloved new element. Tremendous obstacles stood in the way: an inadequate workplace, poor equipment, and a paltry budget. The government was not inclined to open its purse to the cause of science. The two were forced to make do.

It was by now apparent that the amount of radioactive element in pitchblende was so slight (actually only 0.000001 percent) that huge quantities of the mineral would be required to obtain even a negligible amount. Pitchblende ore with its valuable uranium was, furthermore, extremely expensive. The Curies learned that it originated chiefly in the St. Joachimsthal mine in Bohemia, then under the Austrian Empire. The uranium salts were extracted for the manufacture of glass, but what about the residue? The ingenious Mme. Curie offered to buy the cumbersome and useless material and, aided by Professor Eduard Suess in Vienna, her request was fulfilled, free of all costs except transportation.

Early in 1899 a huge horse-drawn wagon loaded with sacks of pitchblende, still mixed with pine needles and dirt, arrived at the School of Physics. The old studio could no longer accommodate them, and the new laboratory the Curies moved to was, if possible, worse.

Marie and Pierre spent virtually four years in a tumbledown shed across the courtyard from their former studio. The skylight roof not only leaked, but had no hoods to carry off the poisonous gases from their work. When weather permitted they worked outdoors, but in rain and snow they were forced indoors, opening all the windows whatever the temperature. The shed did not even have a floor, and its furnishings consisted only of a few wooden tables, a blackboard, and an ineffectual cast-iron stove.

They suffered freezing temperatures in winter, stifling heat in summer, on top of mysterious ailments they had been trying to ignore in recent years: fatigue, body pains, sore fingers—all symptoms of radiation sickness, of which the two were unwitting victims.

While Pierre studied the properties of radium, Marie became a one-woman factory. Working with batches as large as 20 kilograms, she ground the pitchblende, dissolved it, and filtered it innumerable times. She heaved the materials and stood in the courtyard day after day, month after month, stirring cauldrons of boiling liquids with a huge iron bar. She extracted barium in a chloride state, which she submitted to fractional distillation in porcelain bowls, set up along her wooden tables. Her frustrations were multiplied as airborne impurities, iron and coal dust, inevitably contaminated her rare material.

“We lived in a preoccupation as complete as that of a dream,” wrote Mme. Curie. “Sometimes we returned in the evening after dinner for another survey of our domain. Our precious products for which we had no shelter, were arranged on tables and boards; from all sides we could see their slightly luminous silhouettes, and these gleamings, which seemed suspended in the darkness, stirred us with ever new emotion and enchantment.”

The moments of enchantment must have been brief, however, compared with her years of tedious labor. But Mme. Curie’s singular energy and sheer will prevailed: in March 1902 she had a decigram of pure radium. Demarcay’s electroscope had reacted violently to the substance, from which barium at last had been removed.

Mme. Curie attributed an atomic weight of 225.93 to her new substance, whose reality and individuality were now confirmed beyond doubt.