How do Emperor Penguins stay warm in Antarctica when it’s so cold?

The emperor penguin, which happily swims and romps in killing temperatures of minus 40 degrees Fahrenheit, is the only bird that can, and often does, spend its entire life on coastal or shelf ice, without ever coming ashore. Basically, three mechanisms are at work in safeguarding the emperor penguin’s body heat: its feather construction, its weight, and its behavior.

The emperor penguin’s body is totally covered with feathers; it has no bare patches around the feet or head as are found on
penguins of warmer climates.

The tiny, overlapping feathers, numbering about seventy per square inch, are packed so closely they form an impermeable barrier to the wind. Coated with oil, they also resist water. The shafts of the feathers have tufts that, along with a layer of air next to the skin, provide insulation. Below the skin is a layer of blubber thicker and heavier than that of birds in milder climates. 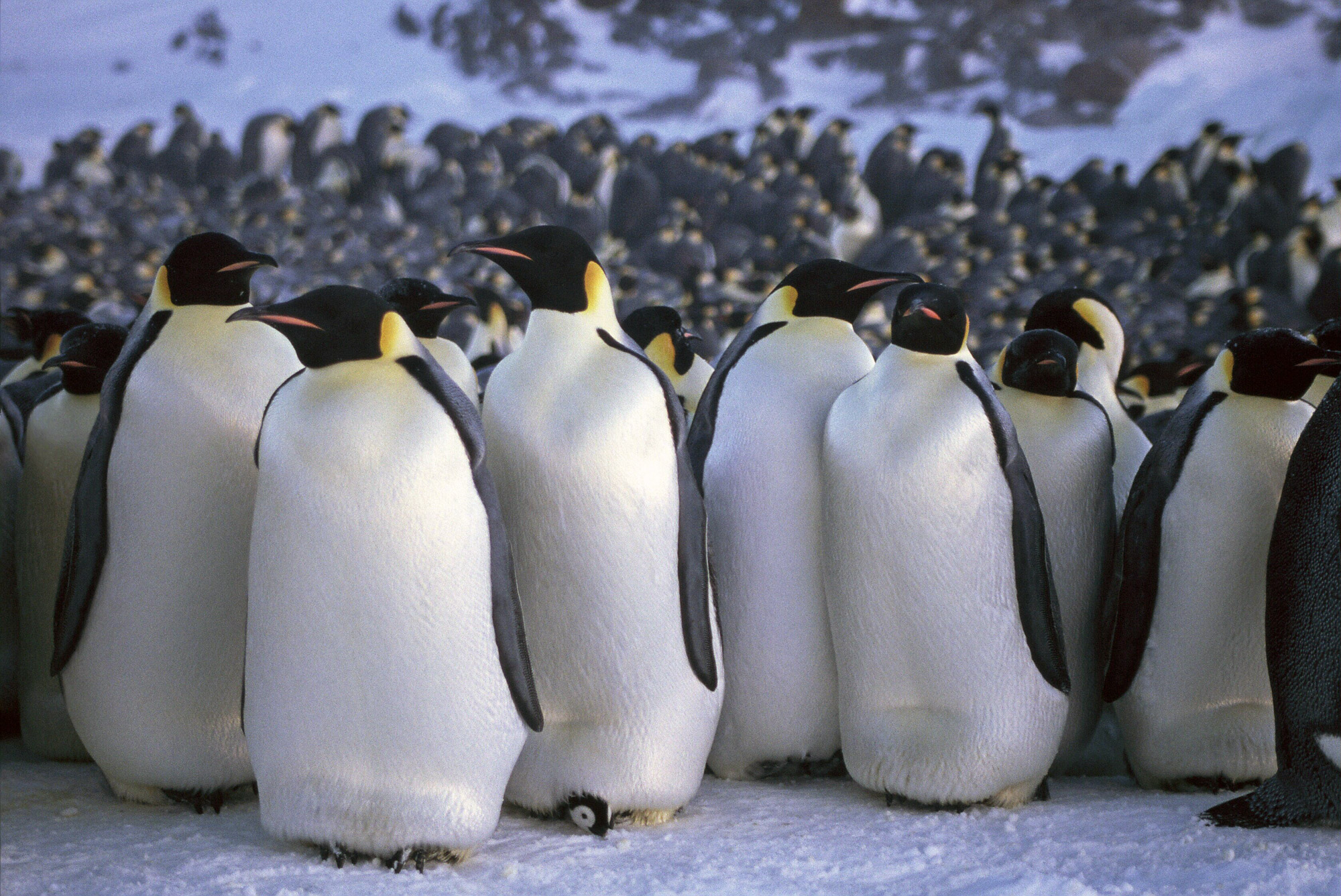 Penguins in Antarctica are in general bigger and heavier than other penguins, and it serves them well. As George Gaylord Simpson explains in his book Penguins, heat loss is proportional to the ratio of surface area to body volume.

Larger animals have a lower ratio of surface to volume, and consequently proportionally less surface area from which heat escapes. The emperor’s average weight is sixty-six pounds, as compared with the Galapagos penguin, which at five pounds enjoys balmy temperatures and seventy degree water.

Perhaps the most incredible survival feat of the emperor penguin is its ability to raise young in inhospitable Antarctic weather.

The female lays one egg, usually in May, and then leaves the homefront, sometimes ranging as far as sixty miles in search of food. Papa is left to guard the egg. He holds the precious cargo on his feet, protected under a fold of skin, and does not leave his post for sixty-four days.

He eats nothing during this period.

At about the time the young hatch, the females return and the weary males can at last go in search of food. The chicks have only fluff at first, not a full suit of feathers, so they need a shield against the cold. Perched on the parent’s feet, beneath layers of feathers, the baby snuggles against the grown-up’s belly.

The adult emperor penguins, meanwhile, huddle against each other in a large circular mass to maintain body heat. They turn their backs to the piercing wind, and can raise the temperature within the group by as much as 20 degrees Fahrenheit. Those positioned farthest upwind, that is, those with their backs most exposed, periodically move around the outside of the huddle to the front of the group.

As more penguins from the back move up, those at the front wind up in the middle, the warmest spot. The well-coordinated system continues so that each penguin in turn shifts from colder to warmer to colder spots in the huddle.

In these ways emperor penguins manage to keep quite warm in their Antarctic habitat. So warm, in fact, that penguin expert Bernard Stonehouse feels the real problem is: How can the emperor penguin ever cool down? Given its impervious feathers and blubber, how can it let off heat when intensely active?

The emperor penguin’s solution is to ruffle its feathers, allowing body heat to escape, and spread its wings, exposing more of its body to the icy Antarctic winds.