Where did maps come from and Who made the first accurate map of the world?

Attempts to map the earth began thousands of years before the birth of Christ.

The first known maps were made by the Babylonians and the Egyptians, who transcribed information gathered from direct measurement of the ground. Babylonian ground plans, made for the purpose of taxing property, were inscribed on tablets of baked clay and date back to around 2300 B.C.

As early as 1300 B.C. the Egyptians made maps on rolls of papyrus, some of which contained accurate indications of sea, roads, and towns. 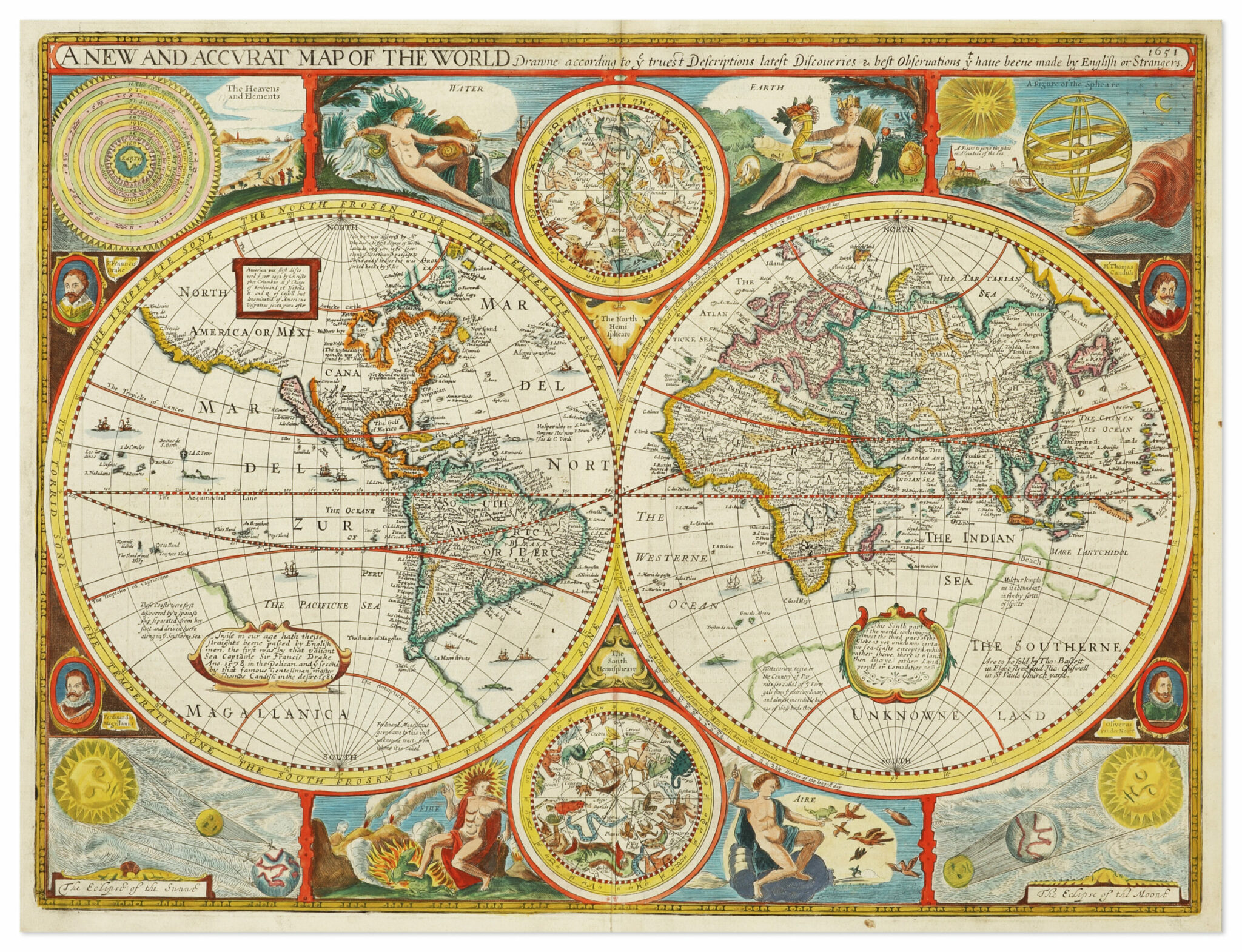 By the 4th century B.C., Greek scholars, aided by astronomical observations, arrived at the conclusion that the earth was a sphere, and at around this time the Greeks used globes to represent the world. In the 3rd century B.C. the astronomer Eratosthenes, through studies of the angle of the sun’s shadow at two given points on the ground, made a remarkably accurate estimate of the circumference of the earth.

The Greeks’ next step was to determine the three standard lines partitioning the earth: the equator, the Tropic of Cancer, and the Tropic of Capricorn. This determination was also accomplished by observing the behavior of the sun. The equator corresponded to the equinox, when the sun rose due east and set due west and the hours of daylight and darkness were equal. The tropics corresponded to the maximum height of the sun, which in turn marked the solstices, the longest and shortest days of the year.

The Greeks also conceived of the Arctic and Antarctic circles, but these parallels were not fixed as they are today; rather, their positions were based on the relation of the observer to the horizon, and their radii increased as the observer moved away from the equator.

In the 2nd century A.D. the scholar and scientist Claudius Ptolemy incorporated the discoveries made by earlier astronomers and put together an atlas of the world on 27 sheets-10 of Europe, 12 of Asia, 4 of Africa, and 1 of the entire globe. Accompanied by text, this was titled the Geographia. Along with his atlas, Ptolemy introduced the concepts of longtitude and latitude. Although the atlas was far from accurate, some of it being based on mathematical errors or on travelers’ accounts, Ptolemy’s work set the standard for map making for the next 1,000-odd years.

Throughout the Middle Ages, Ptolemy’s maps, though preserved, were for the most part forgotten and replaced by unscientific, fairy tale like charts of the earth’s regions. But with the expansion of world trade and the first nautical explorations of the world’s oceans, the need for accurate maps arose.

Beginning in 1300, and for the next three centuries, Italians, Spanish, and Portuguese sailors made a number of navigational charts. Called portolan charts, after the Italian word for descriptions of the locations of ports, these maps showed the coastlines of the Mediterranean and neighboring seas, and later showed the Atlantic coast.

Among the tools used in making these maps were the newly invented mariner’s compass and refined versions of the astrolabe, an instrument used in Ptolemy’s time. As a result of the compass’s use, north began to appear regularly at the top of the map, rather than to one side or at the bottom. The astrolabe, a metal ring marked in 360° with a telescopic sighted pointer pivoted at its center, allowed sailors to pinpoint their latitude by measuring the altitude of the sun. The portolan charts were done as individual manuscripts on parchment, the size and shape of which often determined the scale of the map.

The development of engraving in the 15th century was a significant advance in the science of cartography. Ptolemy’s Geographia, having been copied by hand over the centuries, was first printed in 1472, and it remained, until 1570, one of the most important cartographic publications. In 1570, Abraham Ortelius, who lived and worked in Antwerp, published his Theatrum Orbis Terrarum, which supplanted the Geographia as the authoritative map of the world.

The oldest globe still in existence today was completed in 1492 by Martin Behaim of Nuremberg. The globe was 20 inches in diameter and contained 1,100 place names. From around 1500 and on through the next two centuries, European map makers regularly produced globes in addition to two-dimensional maps.

In the 16th century Gerardus Mercator, who lived and worked in Duisburg, the Netherlands, developed a method of projecting a spherical map onto a flat sheet that showed all navigational directions as straight lines. His method of projection involved stretching the surface area of the map toward the earth’s poles, and maps based on his work are still used by sailors today. One of Mercator’s maps, done in 1538, names North and South America for the first time.

By the 17th century the Dutch cartographers Hendrick Hondius, Jan Jansson, and Jan Blaeu were making revisions in world maps based on many years of overseas explorations. In 1648 Blaeu completed a map of the world that was accurate in terms of coastlines, but still relied, in part, on Ptolemy’s work for details of the interiors of countries.

Elsewhere in Europe, in 1668, the Italian-French scientist Jean Dominique Cassini conceived of a large scale map of the world, a circular “planisphere” 24 feet in diameter to be drawn on the floor of the Paris Observatory of the Academie Royale des Sciences. On Cassini’s map meridians radiated from the center to the periphery like the spokes of a wheel, at angles of 10°. Concentric circles at intervals of 10° indicated latitude, starting with 0° at the equator and numbered in both directions.

The emergence of modern map making took place in the 18th century. The advent of nationalism brought about government sponsored surveys, with France initiating the first topographic survey in the middle of the century.

A method for determining longitude accurately was also developed in the 18th century, largely due to the efforts of John Harrison, an English clock-maker. Harrison invented a clock that would function nearly perfectly at sea; such an instrument was necessary for sailors to find their longitudinal position with regard to the earth’s rotation, reflected by the time of day.

Still, by 1884 no more than 6 million square miles, less than one ninth of the land surface of the world, had been surveyed.

The remaining eight ninths, containing a population of 900 million, was far from being completely charted. In October 1884 the Royal Observatory in Greenwich, England, was chosen to mark the zero meridian, and longitude was marked up to 180° to the east and west of Greenwich. The zero, or prime, meridian not only standardized navigation but also coordinated the world’s clocks. But the quest for ever more minutely detailed maps, based on the most sophisticated measurements, continued.

A major breakthrough in map making occurred with the advent of photogrammetry, the charting of the earth’s surface by means of aerial photography. Developed in the United States in the 1930s, photogramrnetry involves the overlapping of photographs, taken from directly above, to form a stereo picture, the basis for a topographical map. Stereo coverage allows map makers to see the earth’s surface as three-dimensional space.

On a finished map, relief is represented by contour lines. Along with aerial photographs, survey measurements are taken on the ground to provide details of elevation and location. Exceedingly accurate topographical maps produced by the U.S. Geological Survey are usually on a scale of 1 to 24,000 and cover an area of 57 square miles, or 7.5′ by 7.5′.

Although the technology of aerial photography is known worldwide, there is at present no international agency engaged in producing a topographical map of the world. Each country does its own mapping, due in part to each country’s concern for national defense.

Today the United States uses the Landsat satellite system, along with aerial photography, for the purposes of map making. Landsat is a computer assisted system that relies on two satellites in orbit around the earth. The satellites transmit thematic pictures, the colors of which are “false”—not as they appear in nature. The colors represent various features of the earth’s surface, such as roads and buildings, as well as signs of mineral resources or underground waters. Because of their distance from the earth, however, the Landsat cameras do not show detail as well as a camera carried by an airplane. An aerial camera can pick up an object as small as a manhole cover, whereas a Landsat satellite can “see” an object only as small as 100 yards wide.

So what was the first truly accurate map of the world? The answer depends on one’s definition of “accurate,” which in turn depends on what one is using the map for. If you are a navigator who sails on oceans or bays, you would give credit to Gerardus Mercator for making the first useful map.

If you are a hiker who visits remote areas in the United States, you would think of the U.S. Geological Survey’s topographical maps as the first practical charts. If you are a student in a geography class, you would probably look no further than the National Geographic Society’s map of the world, with a scale of 1 to 39 million. But according to one map historian, Richard Stephenson of the Library of Congress, Ptolemy’s atlas was the first accurate map of the world.

“Ptolemy established place names, made regional maps as well as a map of the world,” says Stephenson, “and wrote a whole treatise on the subject. The effect he had on map making lasted for hundreds of years.”